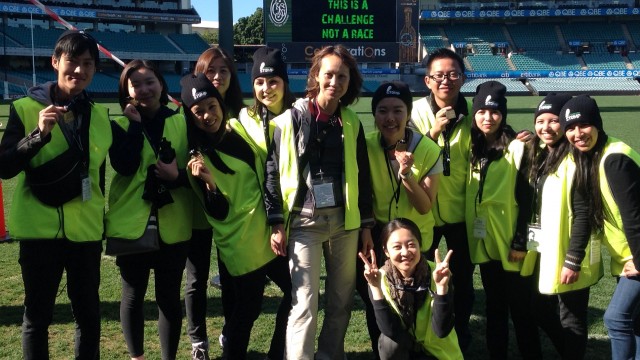 Our amazing group of student volunteers (I am in the middle)

On a Sunday winter’s morning, what would most inner city folk be doing?  Undoubtedly, a likely response would involve sleeping in, after a wild night of partying for most young folk. Here I was awake at 6am, getting ready to meet my group of ILSC students at 7am to take them to an event called “Stadium Stomp” at Sydney’s iconic sporting venue the Sydney Cricket Ground (SCG).

When I first met the group, I was not surprised to discover that only nine out of nineteen students had showed. The rest of them, I suspected were strapped in their beds with no desire to get up so early. Some students appeared half asleep with hot steaming coffee in hand in the mission to stay awake, whereas I was doing my best to prime them up for an exciting day ahead.

So what was this “Stadium Stomp” event that I was about to launch the ILSC students into? Well, basically it was a unique fitness challenge whereby hardcore or amateur runners and fitness enthusiasts run up and down a cascade of 6,300 steps in the grounds of the SCG, with the goal of raising money for charity and putting their stamina and concentration to the test. Sounds like “huffin and puffin” hard work for sure. 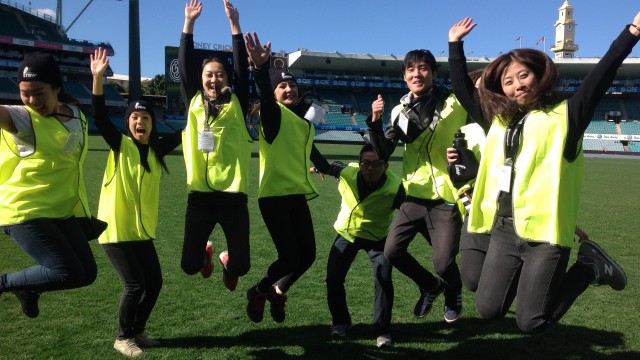 My students were uncertain and curious as to what they were getting themselves into. They had not been to the SCG and it was a first visit for them, but in time they had learnt that much of Australia’s cricket sporting history and victories were held on this home turf.

On arrival, they were all smartly kitted up in their glowing fluro yellow safety vests, warm black beanies, and lanyards, looking very professional. They met the event coordinator and members of the staffing team who gave them a warm Aussie welcome. Waiting in anticipation and listening to the event briefing, each student was paired up and assigned with different roles, duties and a team leader.

During the course of the day’s events, the students were involved in various duties such as cheering on the runners, taking photos of the runners, manning the water station, ensuring that runners were running safely, that no one was about to collapse down the stairs, and the final packing down of the event

Loud music beamed out of the stadium speakers as it enveloped the stadium with runners “stomping” up and down the stairs in lycra tights, shorts and numerical bibs.

Meanwhile, I had the responsibility of ensuring that the students were not only having a great time and the event operations were running smoothly,  but more importantly that they were also using their spoken English in a real life context outside the classroom. 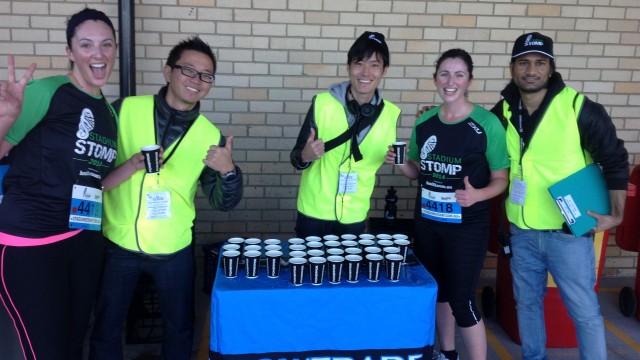 ILSC students cheering on the competitors

ILSC students cheered the runners on as they took on the stairs at each bay section, taking memorable photo snapshots of their intense calorie burning efforts. It made me feel somewhat lazy on the other end!

Towards the end of the day, it was high time to pack down the event and begin the process of cleaning up.

Overall, it was a great day enjoyed by all. It was a meaningful way for ILSC students to practice their English communication skills through hands on experience, where they were involved in a community event and volunteered for a charity as well as being exposed to Australian sporting culture, all in Aussie English.

Furthermore, they had added the word “Stomp” to their vocabulary repertoire, appreciated the cultural sporting achievements and wins at Sydney’s iconic SCG stadium, and were awarded with medals for their team spirit and involvement. In the end I felt that they were certainly convinced it was a Sunday morning worth waking up early for after all.